9 weeks into our 5 week project, ACP Mani of Adodis Technologies gives us a link to a demo that they claim is our finished product. After doing some research, we found out that they went out and bought a script for $55 USD and tried to pass that as their 9 weeks of work for our $2000 USD project.

Here is a cropped screenshot from the site that sells the script: 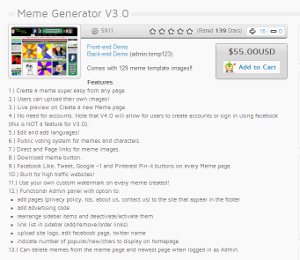 When we confronted ACP Mani, he claims that they had been working on the capability for 3 to 4 weeks now and were using open source code, but when asked what open source project they were using, ACP Mani lists languages such as PHP and Javascript, but can’t name any open source meme projects. He then changes his story to claim that they developed the scripts from scratch using PHP opensource code.

We ask him why there are hundreds of sites that look identical to the demo that they showed us. He then goes back to the open source explanation that anyone could download the scripts. We then ask, what have you been doing for the past 3 to 4 weeks if you just downloaded the scripts from a third party? He explains that it took 3 to 4 weeks to integrate with their coding standards, but now that it is done, he assures us that there will be no more delays and promises earlier updates.

We explained to him our position:
We were in the 9th week of a 5 week project.
In those 9 weeks, we had been shown two demos. One was a partially completed Joomla template showing what we hoped our finished project would look like. The other was a $55 dollar script that they had purchased, but claimed that they developed. The script had no modifications to it and did not satisfy our requirements.
We had already paid $1500 of the $2000 we agreed to after Purandhar (GP) told us that the project was complete.

ACP Mani again assured us that the project would be complete in 7 business days. At this point, we had absolutely zero confidence that ACP Mani of Adodis Technologies would deliver anything. Given the fact that they had shown us nothing over the past 9 weeks, the claim that they could finish everything in the final week was a bit absurd, but we decided to wait until the end of the week so see if they could show us anything.

Iconic One Theme | Powered by Wordpress